The only known cure for sickle cell disease

Hello Everyone and Welcome to my blog! I will be posting on various health topics including sickle cell disease which is very close to my heart. I hope to spread awareness about sickle cell anemia and to be an advocate for those who are still waiting for better treatment and curative options. Today I will be talking about my son Landon, who was diagnosed with sickle cell three years ago, 2 weeks after his birth (2019). I will also share our journey and how my husband and I made the decision to pursue a bone marrow transplant for Landon to cure sickle cell. 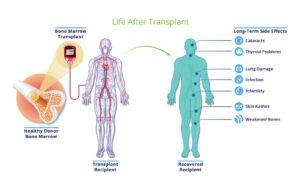 Landon was only 17 months old when he had his bone marrow transplant which was August 6th, 2020. Landon was given a second chance, a rebirth in a sense, to live a normal life where he is free from pain and progressive organ damage. So it is my responsiblity to create memories for him and to have answers for my children one day when they are old enough to understand. I want them to see that I didn’t just move on with my life after Landon was cured. I want my children to see that life is not only about your victories. It’s also about using the gifts that God gave you to help others in whatever you way you can, and making the decision to live on purpose.

Before I get into how my husband and made the decision to pursue a bone marrow transplant for Landon, I want to walk you through some historical milestones for sickle cell disease and the alarming statistics.

What is Sickle cell disease?

So why are so many people still suffering with this chronic, life-threatening medical condition?

The truth is for many years there was little interest and little to no funding for sickle cell disease and research to focus on treatment and curative options.  This is largely due to the existing racial disparity and the fact that people who are affected by SCD are mostly of African American descent. In the 1970s, one of the great achievements of the civil rights movement was to create the Sickle Cell Disease Association of America, which led to the Sickle Cell Anemia Act of 1972. Since then, there has been more public awareness of the genetic disorder with some improvement in funding towards better treatment and curative options, but it is still not enough.

So what do I mean when I say it’s still not enough?

So you might be asking yourself how many bone marrow transplants have been done to cure sickle cell disease?

This number is fluid because there is more awareness in recent years but from the information sources I have seen only about 2,000 people with sickle cell anemia have undergone bone marrow transplants. So imagine how many lives could be changed if we had enough worldwide support and more funding.

Do you know what else is shocking?

How did my husband and I make the decision to pursue bone marrow transplant for Landon?

The more recent studies showed that the cure rate for children with SCD with a matched sibling donor is about 95%.  The benefits of the transplant far outweighed the risks from our perspective. This might not be how others feel but we certainly felt that we were willing to take a chance at Landon being cured as opposed to the alternative of the unpredictable course of SCD and possibly losing him at a young age.

What is a matched sibling donor?

A matched sibling donor describes either a brother or sister who shares the same mother and father that have an identical immune system blood type. There is a blood type for your immune system called human leukocyte antigens (or HLA). These antigens are proteins on most cells in our body and our immune system uses these proteins to see which cells belong in our body and which cells do not belong. When they see cells that don’t belong they signal the immune system to attack those cells and clear them from the body. This is what happens if donor and recipient do not have matching proteins which is not what we want. So when someone is being evaluated for a bone marrow transplant they test HLA proteins for the donor and the recipient. In our case, avery and landon had HLA typing done to see if she was a match for Landon. Landon was 5 months old and Avery was 3 years old at that time. Avery turned out to be a perfect match for Landon so there was less concern that Landon would reject Avery’s cells. It can still happen but less likely if the donor and recipient are a full match.

What does bone marrow mean?

What was the preparation process leading up to the BMT like?

Landon also needed to go to the Operating room L(OR) for the placement of a big intravenous (IV) line in a large vein near his heart (this is called a central line). This big IV is necessary for giving multiple medications including chemotherapy effectively, and other medications that cannot be given through a smaller iv line. This big IV line is also necessary because if Landon got really sick and needed a lot of medications, and life saving measures this line provides access to deliver medications quickly and effectively.

We also consented to participating a study for testicular preservation options. We consented to the removal of a small piece of Landon’s testicular tissue to be stored (frozen) for fertility preservation.  This procedure was done at the same time the central line was placed. 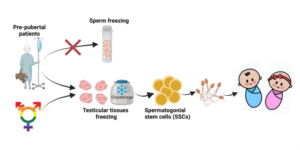 It was an insane time because we were in the middle of the pandemic so this of course added a layer of stress to the entire process. In Landon’s case, they used Avery’s umbilical cord blood that was collected at the time of her birth and they did a bone marrow harvest to get more cells from her bone marrow because the umbilical cord cells were not enough for the transplant. Avery was 10 days away from her 4th birthday when she donated her bone marrow cells to Landon. She was given medications to put her to sleep and she was taken to the operating room where they collected her stem cells from her hip bone. They collected the stem cells with a needle that is placed into the marrow. This process is called bone marrow harvest or bone marrow procurement. The stem cells were sent of the lab to go through a filtering process. Once the filtering process was complete, the cells were then ready to be given to Landon. My husband stayed with Landon on the bone marrow transplant unit because Landon was only 17 months old so a parent had to be with him at all times. I waited in a different section of the hospital until Avery returned from the OR. When Avery returned from the OR and woke up from the anesthesia she did not complain about any pain and was pretty much herself. It was quite remarkable. I have a video of her a few hours after the bone marrow harvest which is posted on my Youtube channel.

Landon received Avery’s umbilical cord blood cells and the fresh stem cells harvested from Avery the same day and 2 years later, he is cured and off all medications.

That was our process leading up to Landon’s bone marrow transplant. I have posted an anniversary video on my Youtube channel which can be found at link below. Please sign up with the Be The Match registry if you are interested in donating.

No products in the cart.